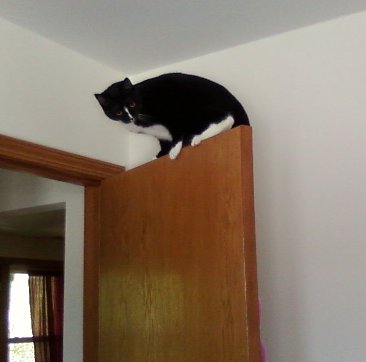 My day started like any other– waking up, cleaning up a bit, ruminating on the class I taught last night and whether it went all right. Then things got weird.

First, I have crazy cats. For instance, this is where Nasturtium decided she wanted to hang out. Once she was up there, it wasn’t so great. She got down pretty quick and returned to her normal activities of sleeping and meowing at birds.

After this, I was hanging out around my apartment (I currently don’t work Thursdays, and was playing hooky from a meeting at work that I could have gone to, but wouldn’t have been paid for attending). Around 1 or so I got restless and decided to go for a walk to the dry cleaners to drop off some stuff, and then maybe around the neighborhood to the grocery store or the library.

Here’s where I ended up. 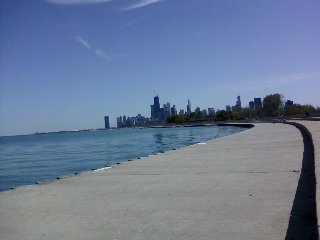 Yes, it is only 4.1 miles from my apartment to Diversey Harbor, and it is possible to walk right to the lake without turning or going much out of the way. My dirty little secret is that I love walking around Lincoln Park (the neighborhood). I also love open bodies of water, so this was an entertaining walk, and didn’t even take that long.

Tonight Mike and I went to the members preview of the Modern Wing. It’s visually stunning inside and out, with some great views of Millennium Park. We spent most of our time in the early 20th century European section, and didn’t get a chance to see photography, architecture and design, or the most recent paintings. Saving that for later, since I intend to get a lot out of the cost of my membership. I mostly skipped Surrealism. It’s too scary. That, and Futurism. Give me some De Stijl any day. It’s more soothing.

Despite all the grandeur of the space, I couldn’t get away from the feeling that it’s like a huge version of the new Champaign Public Library, or perhaps the CPL is a tiny version of it. If I knew more about architecture, perhaps I could name the style of modern public buildings. Airy, but also brown…

I don’t normally like new words very much. I didn’t even use normal slang like “dude” or “awesome” until 2004 when I lived with a SoCal girl in Athens. But the word <em>staycation</em> has captured my heart, probably because it came into vogue around the time I and everybody else was unemployed.

Anyway, I’ve been trying to make the most of having free time during the day and living in a fantastic city to go out and see museums. Some of my recent forays have included the International Museum of Surgical Science, and the McCormick Freedom Museum. Yesterday I finally managed to visit the Chicago Cultural Center. This wasn’t something I planned, which is actually the same way I went to the Freedom Museum. Sometimes you get to Michigan Avenue and these things happen.

The Chicago Cultural Center used to be the Chicago Public Library a long time ago, and is incredibly ornate in the way that public buildings used to be. They have recently finished restoring the Tiffany glass dome, which is, as you can imagine, spectacular. The building now holds a variety of cultural events and art galleries, all of which are free. That’s pretty much how I found myself in there, since when spending money I like to think about it a lot first. My dentist’s office is right across the street, and I had an hour to kill before my appointment.

I saw most of the art exhibits, but the two big ones on right now are “William Conger: Paintings 1958 – 2008″ and “Collaborative Vision: The Poetic Dialogue Project”. The first was a retrospective of an important abstract artist, and the second was collaborative pieces between a visual artist and a poet. I’m kind of a philistine when it comes to modern art, but those two exhibits were definitely a fun surprise.

I’m sure the Staycation will continue, and I’ll keep you posted.